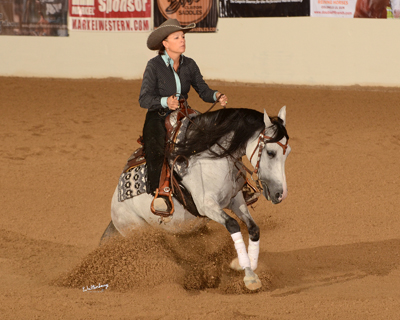 The National Arabian Reining Horse Association (NARHA) will make its first official appearance at the eighth annual High Roller Reining Classic, Sept. 9-17 at the South Point Equestrian Center in Las Vegas. The incentive program has taken the reins of the Arabian Reining Breeders Classic, a fixture at the High Roller, and made the decision to keep the event on track.

There were almost 2,500 recorded draws at last year’s High Roller, including approximately 60 kids who signed up for the Youth Team Tournament. The Youth Tournament was at the top of the NARHA’s list of events to continue. This year’s competition will be very similar to last year’s, with the first Saturday and Sunday mornings of the High Roller featuring Youth Tournament runs in the main Lucas Oil Arena. The four-man teams consist of one 10 & Under Short Stirrup rider, one 13 & Under Youth rider, one Arabian or Half-Arabian Youth rider any age 18 or under, and one 14-18 Youth rider. The winning team members receive $500 each and the top three individual riders overall receive $1,000, $750 and $500, respectively.

In addition to the Youth Tournament, the NARHA will be offering $9,500 to Arabians and Half-Arabians competing in the Open and Non-Pro at the High Roller. Smartpak is also offering $1,000 for Arabian and Half-Arabian horses in its Maturity. Markel Insurance has recently signed on as the Official Insurance Company of the National Arabian Reining Horse Association.

“We’ve been involved with Arabian reining horses in conjunction with the High Roller Reining Classic since 2014,” said Frank Constantini, a Markel horse specialist since 1995. “It’s only natural for us to continue with this program now that it has taken the form of the NARHA. It’s easy for us to envision the Arabian horse coming more to the forefront in the next few years as a very competitive Western-type performance horse in both reining and ranch riding. They are a beautiful, tough and versatile horse.”